VIAE is a strategic and competitive Area-Control Board Game set during the rise of the Roman Empire​.

As Tribunes, you are set to conquer the world for the glory of Rome. Build roads, smite your enemies, gain influence in the Senate. But watch your back, everyone has their own objectives and agendas. Your fellow Tribunes will aim to disrupt your goals. Treat them as a tool on your path to victory.

Swords may win battles… But influence wins an empire.

Created by first-time designer Dom Atlas, VIAE – Roads of Rome will be available to support on KICKSTARTER from May 19th – June 23rd 2019.

By Off The Shelf Board Game Reviews 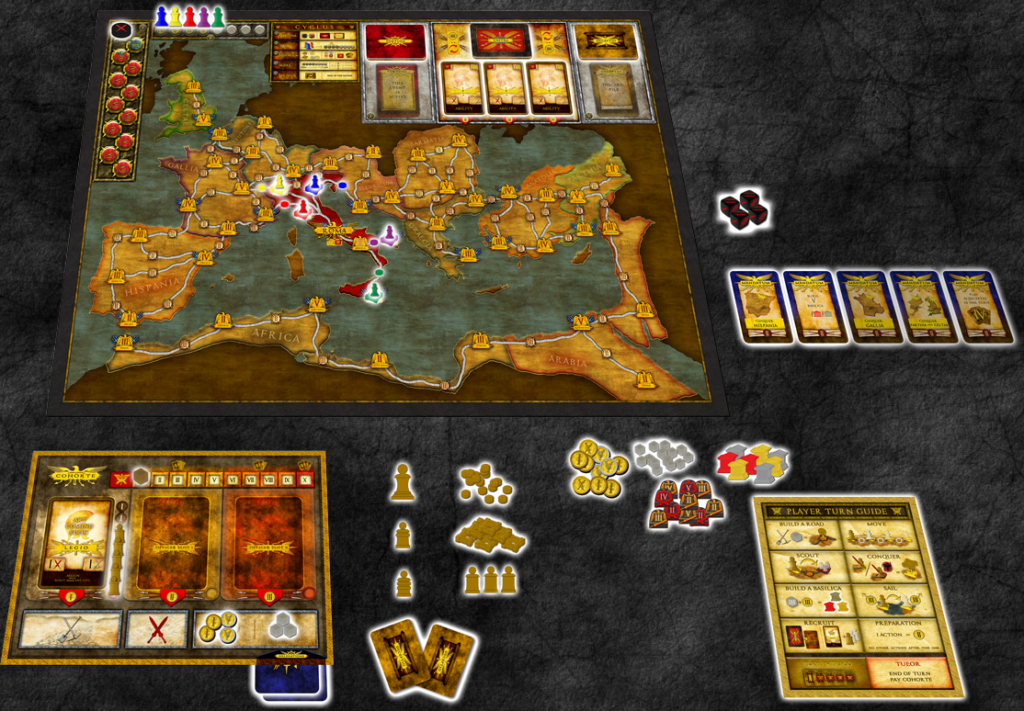 During the era of expansion and conquest in the roman empire, you are leaders of the military forces. Tasked by the senate to conquer the Mediterranean world, from Britannia to Arabia, from Hispania to the far east of Parthia. You thrust stone swords into the hearts of enemy regions by building the largest network of roads, creating the bloodline of the empire.

To achieve Mandata, orders given by the senate, you will recruit powerful officers into your ranks and conquer increasingly hostile cities. Glory and honor aside, the one thing of value in the senate is your influence. Through your exploits you’re goal is to become the most influential leader and perhaps one day powerful enough to become emperor yourself.

Players begin the game with a small Cohorte of legionnaires, nearly no influence (1) and some resources (stone and denar). Leaving the empire from starting cities each player chose themselves, they strive to be the first to accomplish their objectives (Mandatum).

The roman empire was a place of opportunism, intrigue and deception. Your fellow Tribunes will envy you for what you have and will find ways to disrupt your path to power. Thanks to your connections and influence, you have the tools (Deceptio cards) to fight back. You can’t just turn your army against them, you’ll have to be strategic about it… A missed shipment here, an unforeseen revolt there… it’s hard to have influence over the people of Rome if you’re seen as incompetent.

VIAE keeps randomness nearly nonexistent and rewards strategic players. Aside from drawing cards, every other aspect of VIAE is controllable. You can focus on your hidden objectives or try to sway others to assist you in completing communal objectives, available to anyone to achieve.

VIAE is a game with a turn order selection phase. Depending on your strategy, you could take your actions before anybody else, granting yourself an advantage or others a disadvantage.

The Game evolves as you are playing. At first, you’re building roads, conquering peaceful cities, gathering resources and gain reputation. Later in the game, the enemies of Rome will fight back, so you might want to ally yourself with others. Eventually, you’ll be close to completing your objectives and winning the game, but you need to keep your “allies” from doing the same. These shifts make VIAE more than an area control game.

How players choose their strategy and play style, what Mandatum you could achieve and what events (Fortuna cards) you’ll have to deal with, every game will be unique.